In a landscape that is Mount St. Helens ash but looks like snow, Delbert Driggs (background) and his wife Nadine work on cleanup.
Cheryl Elkins/Courtesy photo

The cloud of ash and dust produced by the eruption of Mount St. Helens approaches Moses Lake.
Cheryl Elkins/Courtesy photo

Cheryl Elkins/Courtesy photo What looks like a snowy yard is actually ash, as much as four inches, which fell in Moses Lake after the eruption of Mount St. Helens.


Cheryl Elkins/Courtesy photo What looks like a snowy day in Moses Lake is actually an attempt to clean up ash from the eruption of Mount St. Helens – taken a few days later, with clouds of ash still

Moses Lake city crews washed down the streets in an effort to clean up tons of ash – really pulverized rock – resulting from the eruption of Mount St. Helens.
Cheryl Elkins/Courtesy photo

MOSES LAKE — Until the spring of 1980, Mount St. Helens was part of a lesson in geography class, the one when kids had to learn the highest mountains in the Cascades. For most people, unless they lived close to the mountain, that was it.

But in March 1980, around March 16, the mountain started showing signs of volcanic activity. Earthquakes shook the ground.

A small eruption opened a hole near its summit on March 27. Geologists and news organizations camped out around its base. The world learned all about cryptodomes and harmonic tremors.

It was all very interesting. But there was also a feeling out there that it might not end well.

“The mountain had been shaking for a couple of months, and we knew an eruption was likely some day,” wrote Cheryl Elkins, a Moses Lake resident. She was among the folks who responded to the Herald’s request for local people to share their memories of the Mount St. Helens eruption for this article.

Doug Sly, who was working as a reporter at the Columbia Basin Herald in 1980, called Mount St. Helens “the most studied volcano in history.” So there were plenty of witnesses to what happened just after 8:30 a.m. May 18.

The debris cloud arrived about noon, according to a timeline compiled from police records and stories published in a 1986 special section of the Herald.

“One phenomenon that was amazing and quite alarming to see were the streaks of lightning going sideways through the ash clouds,” Elkins wrote.

“It was so dark it seemed like night and it was ‘snowing,’” wrote Sheila Palmer Crouser.

Chuck Allen was 9 years old and with his family at church in Quincy.

“The church windows darkened, as if there was a thunderstorm approaching,” Allen wrote.

“We watched the ash fall like snow,” wrote Linda Emerick-Miller. It has always been referred to as ash, but it wasn’t like ash produced by a wood fire.

“Under a microscope it looked like broken glass,” Sly said.

Allen remembered coming out of church into a “gray, moonless night with sooty flakes floating out of a flat-black sky.” A boy was running through the parking lot, Allen said, telling people not to look up – the ash would burn out their eyes.

It didn’t burn out anybody’s eyes, but it caused a lot of trouble. The Herald, in a story May 22, 1980, estimated three to four inches dropped on Moses Lake.

The ash was “kind of fluffy,” Sly remembered, at least until it got wet. It made driving impossible. “You tried to go anywhere, you ruined your car. Simple as that,” Sly said.

Bill Newell, in 1980 a city public works employee, was interviewed in 1986. He remembered nearly rear-ending a bus whose driver was trying to find a place to take his passengers.

Newell led the bus to Our Lady of Fatima Catholic Church’s parish hall, which had been set up as an emergency shelter. Visibility was so poor that the journey from downtown Moses Lake to the church took nearly 30 minutes, Newell remembered.

People unlucky enough to be on Interstate 90 were stranded as visibility went to zero and car engines died.

Our Lady of Fatima’s hall and other churches, public buildings and private schools served as shelters.

Allen’s family did make it home from church, even after another car sent theirs into a ditch. His dad planned to walk home and get another vehicle, but his mom suggested a prayer first. As his mom finished, a van appeared out of the gloom.

The driver and his family were traveling and needed a place to stay, which the Allens offered, and the family gave them a ride the rest of the way home.

His mom considered it the answer to a prayer, he said.

Sly covered his newly painted car with a tarp (his best decision that week, he said) and turned to other means of transportation.

“I had the perfect device. I had a skinny-tired, 10-speed bicycle,” he said.

The ash fell at least 10 hours, well into the night. “When daylight came it was dead quiet,” Elkins wrote, and the green grass and trees had disappeared. “An ashy gray blanket covering everything,” she wrote.

“It was on every square inch of everything for as far as the eye could see. Four inches of it,” Sly said. “Something akin to cement.”

Police and fire vehicles were just as susceptible to the ash, despite ingenious attempts to rebuild their air circulation systems. “Police on bicycles,” remembered Diana Slocum.

Elkins remembered common items disappearing from the grocery stores. It was 10 days before travel was completely restored.

Because newspaper delivery was impossible, the Columbia Basin Herald missed three days of publication — the only time in its history.

“School was closed for the remainder of the year,” Elkins wrote.

George Harris was a teacher at Moses Lake High School, and while the kids were out of school, the teachers were required to work. It got pretty boring, he said.

But the real problem was getting rid of the ash – pulverized rock, really.

“My stepdad and I used shovels to shovel off the roof because it was very heavy,” Slocum said.

Other people had different recollections.

Crouser’s parents helped remove the ash from the roofs of local businesses. “My dad Jim Palmer told me it was difficult to shovel the ash because it was so lightweight it swirled around and off the shovel,” Crouser wrote.

Homeowners were told to remove it as quickly as possible, Elkins said, because if it got wet it might buckle the roof. But once it was on the ground homeowners still needed to get rid of it.

City officials, faced with streets full of the stuff, also had to figure out what to do with it. They finally settled on watering it down.

Irrigation districts donated sprinklers, which were placed in the middle of the street. They watered down the ash, “not too wet, not too dry,” Sly said, because both were bad. “Then it turned into a snow removal operation,” he said.

City officials used heavy equipment from local companies, hired equipment from outside companies, 187 pieces in all. Even with all the equipment working 24 hours per day, seven days per week, it still took six to seven weeks to clean the ash off the streets into designated dump zones around the area.

For homeowners, “then came the job of cleaning it off the lawns, which was no easy task, especially trying to figure out how to get rid of it all,” Elkins wrote.

“It was an interesting event to experience, but not one I’d care to repeat,” Elkins said.

Cheryl Schweizer can be reached at education@columbiabasinherald.com. 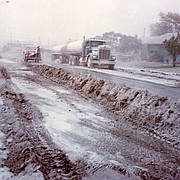 Moses Lake city crews washed down the streets in an effort to clean up tons of ash – really pulverized rock – resulting from the eruption of Mount St. Helens.

Cheryl Elkins/Courtesy photo What looks like a snowy day in Moses Lake is actually an attempt to clean up ash from the eruption of Mount St. Helens – taken a few days later, with clouds of ash still

Cheryl Elkins/Courtesy photo What looks like a snowy yard is actually ash, as much as four inches, which fell in Moses Lake after the eruption of Mount St. Helens. 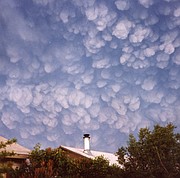 The cloud of ash and dust produced by the eruption of Mount St. Helens approaches Moses Lake.